Shell's differentiated fuels are the result of extensive research and testing both in races and under typical daily driving conditions.

Motorists are looking for advanced fuels to help: increase their car's performance, achieve optimum combustion, and consequently fuel economy, and reduce emissions. Over the years, Shell has performed road trials equivalent of going round the world thousands of times. That's why you can always be sure that, from refinery to road, our fuels are top quality. This is Shell's seal of approval.

So, next time you fill up, make sure it's at a Shell branded retail station!

What does DYNAFLEX technology mean

How does DYNAFLEX technology work in engines?

Shell drew on over 100 years of experience in fuels research and development in order to design DYNAFLEX technology. Our most advanced fuels using DYNAFLEX technology are the result of extensive testing - over 3 million kms and more than 250 cars aiming to deal with the problems of reduced performance and efficiency.7

Car manufacturers worldwide aim for improved engine efficiency. Modern engines are getting smaller but retain a high power output and often use new technologies, such as direct fuel injection and turbo, to achieve improved performance and efficiency. The main challenges of modern engines are hotter running, higher engine load and higher pressures.

In addition, gasoline engines are susceptible to wasted energy through increased friction. Friction takes place between the pistons and the cylinder wall and it can cause up to 15% of an engine’s energy loss. DYNAFLEX Technology contains friction-reducing molecules which form a robust film instantly which can reduce friction under a wider range of conditions compared to our previous generation friction reducing technology.

Shell scientists have been using their passion and expertise to create our most advanced fuels.3 Shell V-Power 100 is the only fuel that has been developed by the Shell scientists together with the technical support from Ferrari.

Shell V-Power with boosted DYNAFLEX Technology, is our most effective fuel at helping to restore engine cleanliness by removing deposits that have already formed. 3 DYNAFLEX technology is composed of powerful cleaning molecules that help to prevent and remove dirt deposits in the engine.1 Our advanced formula has been developed to operate under the extreme conditions of the fuel intake system and to remove up to 80% of performance-robbing deposits.6 This keeps the fuel intake system clean, allowing the engine to run better and improve the performance of your car.1

Moreover, gasoline engines are susceptible to Knock effect caused from late ignition angle adjustment or abnormal combustions when run with low octane fuels. Our latest and most advanced Shell V-Power enhanced octane fuel with boosted DYNAFLEX technology can help to deliver performance and efficiency benefits on all types of roads and driving.3

Shell scientists have been using their passion and expertise to create our most advanced fuels and they have created the new Shell V-Power Diesel, which is designed to provide better engine performance and unique driving pleasure!

Usually, over time, deposits form in the fuel injection system, which may lead to loss of power and performance. Shell V-Power Diesel with DYNAFLEX technology is the solution to this problem since it is specifically designed to remove up to 80% of performance robbing deposits 6 and provide our best cleaning performance. Shell V-Power Diesel is our most effective fuel at helping to improving engine cleanliness by removing deposits that may have already formed.1

In addition, Shell V-Power Diesel has GTL. GTL (Gas to Liquids) is a special Synthetic component, developed exclusively by Shell's laboratories. Produced from natural gas, it is characterized by its exceptional cleanliness offering cleaner and more efficient combustion. It has also a much higher cetane number compared to regular diesel.

Furthermore, the new Shell V-Power Diesel is environmentally-friendly due to its cleaner combustion; It is also the only diesel in the market with a molecular marker, a substance which guarantees the quality of the fuel in your tank.

Our new Shell Gasoline with DYNAFLEX technology incorporates new friction-reducing molecules designed to work instantly with a robust friction-reducing film over essential parts of the piston system.2 This allows them to move more freely over each other, reducing energy waste and maintaining engine efficiency. Our new Shell Gasoline with DYNAFLEX technology enables better performance in tough conditions, both on the highway and in the city.3

At Shell retail stations, you can find the advanced technology lubricants Shell Helix and Shell Rimula, both for passenger vehicles with petrol engines and small diesel engines, and for professional drivers of vehicles with heavy-duty diesel engines.

The Shell Helix lubricant range is suitable for petrol engines and small diesel engines. It contains the unique patented Shell PurePlus technology combined with the active cleansing technology. This unique combination means that the Shell Helix Ultra lubricant range can provide even higher levels of cleansing and performance - that lower cost base lubricants cannot achieve.
Thanks to this combination, in rigorous industrial testing on engines, Shell HelixUltra lubricants achieved 65% greater piston cleanliness, thus exceeding by far the minimum industry standards. 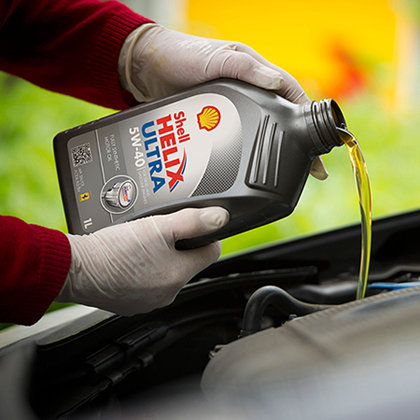 The new Dynamic Protection Plus technology gives the engine outstanding wear protection both on- and off-road, and in all weather conditions, plus it is ideally suited for any temperature start up. It defends against acid and deposit build-up thus protecting the engine and extending its life as well as lengthening the oil-change intervals.